From NITIE to NIGDI, a new comic strip series from the inner cranium of blogger Aditya Narayanan recently took off on a Friday after some random incidents at his residence led him to the belief that his home is really fun place and that the little anecdotes from there that should be shared with the world.

The characters in the series are mainly based on the residents of the Nigdi Apartment, namely

Adi - The person creating this comic strip,often portrayed as a sarcastic, debonair yet bumbling personality.

Su - The dashing superhero character who is heavily influenced by Bollywood films but is supposedly innocent at heart.

Pedro - The funniest of the lot, naive and goodlooking, often ends up being the butt of the joke.

The Incredible Pulk - His burp is known to be scare the most majestic of lions, The Pulk is usually a friendly character and loves food.

Producers have revealed that other characters who are friends of the Nigdi quartet will also show up on special episodes. Shown below is Episode 2 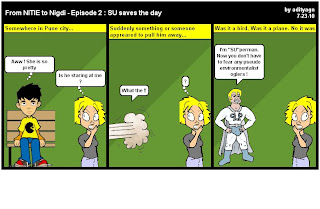 You can find the series at :

Disclaimer: Those of you who do not know these characters might find the strip quite boring, so apologies. But someday, I will expand my horizons
Posted by Quicksilver at 7/23/2010 05:40:00 AM