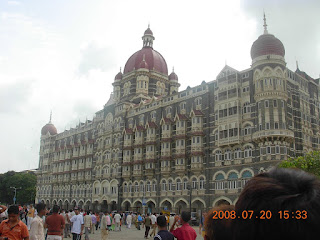 "What can one do against reckless hate ?", says King Theoden as the Uruk Hai break into the fortress at Helmsdeep.

These words echoed in my head as a bunch were huddled in front of the TV on Wednesday night as the events unfolded along one of my favourite places in Bombay. As innocent lives were taken, vigilant cops killed and hotel residents taken hostage, a sense of helplessness engulfed the residents of this city.

Who is to blame ?
The system ?
The politicians ?
The late reaction of the otherwise swift Military forces ?

I leave that to your judgement. I'm just filled with anger. An anger that comes from realization that I'm in a position where I can do nothing, but vociferously express my feelings. I'm a common man and I echo the voices of a hundred more people who I have spoken to atleast.

TV channels always raved about the "resilient spirit" of the Mumbaikar, but now that I'm here I realise it is not resilience, but numbness that has taken over this city. People are getting used to this and the Government just sits there, fires a few people, plays the blame game, promises meagre amounts for lost lives etc etc etc.

Light candles, Voice your opinions, but make sure there is action, it is high time for something positive to happen. We can't be held hostage by ones that we elect. We have the money & the resources, it just needs to be put to good use. Awaken yourself. Do something, do anything. Don't ask me, I'm clueless as you are. But let the fire within never die.
Posted by Quicksilver at 12/01/2008 05:42:00 AM

Quite thought provoking!
Its not just the numbness of people, its indifference. We assume that politicians are corrupt and that none of the candidates are good enough to deserve our votes. Sometimes one wonders how many such brutalities will it take for us to realize that it is time to act.

This can happen to anyone...
I was at Gateway on Sunday... Had it been Wednesday... I would have been one of the victims... God is great!!!
Condolences to those who lost their near & dear ones...
The system really needs to change!!! Don't ask me how either!
Me too a clueless 20 something who loves the country & want only the evil to die... not mankind!!!

Its really shocking to see the state of affairs in a country of this stature.. India which boasts itself of unity in diversity succumbing to the forces of terror... Like u hv well put it, whoz to blame.. The right course of action is to strengthen our military forces.. and a word to the politicians- please dont practice ur money crazy corruption with the weapons for the security forces... it was sad to see the pitiable state of equipments provided to the forces.. the policemen had to storm the hotels without even a bullet proof vest say night vision glasses... lets all unite and convey this point to the politicians and the bureaucracy and keep our fingers crossed for a safer peaceful India...

Outside the periphery of our private grief lies public anger...it would take an extra-ordinary leader to forge change in these extra-ordinary times...unfortunately none of the "bunch of jokers" (quoting Mr. Ronen Sen here) measure up...one thing is certain though...the personal mythology of Mumbai has changed forever...the city is a scarred veteran of many setbacks but one just wonders...how much till the spirit breaks completely!!!

i am tired of living in this country. our so called politicians are more worried about votes than voters! i certainly have no clue on how to change this system. some things change by evolution, some others by revolution. we have reached a point from where we cannot think of the former and it is too soon for the latter. let us hope that one day in the future India might actually become a superpower.

Dwight Howard (1985), December 8 - was born in Atlanta, Georgia, USA Atlanta, Georgia () is a professional basketball player, pf center in the NBA, the Orlando magic. Dwight Howard was the 2004 NBA draft, the 2008 NBA champion dunk. 2009 and 2010, Howard won consecutive NBA defensive player of the year award, and in rebounds and blocks two data for two years in the NBA.Howard shoes