Infinite Fun ... and some learning too

When I'm happy I'd like to multiply my joys and that is why I'm probably writing this blog. Its a been a long while since something worth mentioning happened in my life, Nirvana being the last.
The last week has been pretty eventful and this is how it unfolded.

Monday: Cognizant came calling and I answered their call. Got placed, with the right kinda preparation and some effort.

Tuesday: Went to Kashish's house for lunch. Feasted on yummy parathas with makhan and mouth watering biryani. This was the first time, I had to suck the pulp out of mangoes and well let me just say, I made a fool of myself :P :P. This was when a friend of mine called saying my results had come. I was little anxious, but not too bothered since my CTS would have neutralised any threats that the results posted. I always think that things in life can only get better, and proving this fact, Puppy called me saying I had cleared all subjects with 72 %. Was damn relieved.

Wednesday: Spent most of my day at Career Launcher since they were organising a residential workshop called Infinity 2007 and I was helping co-ordinate. Dinner with family in the evening was a rare occurence and thoroughly enjoyable.

Thursday: Three of my friends came home and my father dropped us at the Rendezvous Point ie. CL Parklane. Most of my friends boarded Bus # 1 and I was the Captain of the Bus. We reached the destination - Sreenidhi Resorts in about an hour. We were then shown to our rooms. The guys in the first bus, got rooms with cockroaches and spiders for company with rickety old fans and spongeless mattresses. But we weren't the ones to complain since there was lots of fun to be had.
We were divided into 3 teams :- Thunderbolts, Castalia and Intrepid. My friends and I ended up in Thunderbolts so it was gonna be a ball for sure. We had a GD session first and then a few games which tested group dynamics and strategy.
The evening was set aside for planning the cultural events and deciding what was to be done. As Radio Mixing was my area of expertise, I got into that and we made a funny script. The night was totally ours, we hung out with people, got to know them better and made some amazing friends.

Friday: Bah !! The worst way to wake up, have a bunch of girls break down your door. Well it didn't deter us too much because once we shooed them away, we went right back to sleep. We had another game called Liar Liar which was a lot of fun and this game our team won by 20 pts and we were leading the pack. Then we had interview sessions. Here we were divided into groups of 3 and had to interview each other. During our exercise my friend and I tortured the eternal bakra Nitin, who I must mention had mustered quite a fan following after a random rendition of Tanha Dil for the CL faculty. The evening and night were a lot of fun. We had a disco, and for the first time ever, I danced for three and a half hours straight. Boy !! It was a lot of fun and every muscle in body hurt after that. Late into the night, our gang hit the merry go round and we spoke till around 3 in the morning.

Saturday: Gyaan sessions by junta who were headed to the IIMs made me realise that the CAT wasn't that big a deal and with the right frame of mind, anyone can crack it. Then after brunch, off to the Culturals. After 2 hrs of performances, Thunderbolts and Castalia were declared joint winners. We had a photo session around the resort for a while and then headed back home, wishing that we could turn back time. 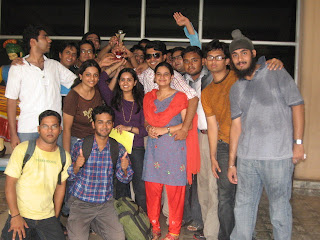 Thanks to all those guys who i got to befriend, the friends I got to know better and everyone at Infinity 2007. The memories will last forever.
Contact CL soon for the videos and pics
Posted by Quicksilver at 6/11/2007 12:31:00 AM

Whoa man! some week! Though i was with you for half of it and knew about the other half..it still has a lot packed into it when u go over thru it once... Days like these linger forever..

How dare you forget to mention the technologically advanced facilities like the Intercom we had? :P How would we even communicate without handy tools like those? :)

Well i can write volumes abt dis bindas guy...He is an absolute sweetheart.. A guy wit al da brains an brawns..

Infinity-07 was damn fun,we were given bad rooms,we had to sleep around spiders n all soughts of shit...but d 3dayz of infinity were kick ass...everyone had a ball of a time although i was made d eternal bakra