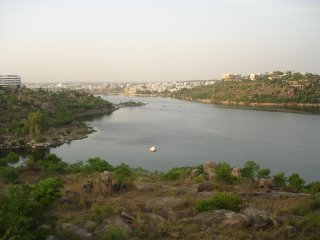 There was something in the moisture laden wind that brushed up against me that said , "Son ! Adventure beckons". Shiva, my partner in crime was the guide for the day as it was his ILAAKA. So we picked up the equipment ie. a camera & a helmet, and made for the Gachi Pass. At the foothills there was smoke from the garbage that was being burnt, we were forced off our transportation. My Splendor had made a laudable effort acting as a dirt-bike for most of the journey. Thank you my dear faithful stallion. Then after we had reached the farthest position on the hill after which we couldn't use the bike any further, we set out on foot. This was our base camp. Armed with our weapon of choice, a SONY CYBERSHOT 5.1 MP we made our way towards the unbelievable rock formations that stood like Goliaths.
We made our way cautiously towards a formation called "the couch". After this we passed "the triplets". This was when MR.NATIONAL BIRD, sensed us approaching & made for safety, we could see his fluttering tail a few feet above the ground disappear into the valley. Before either of us could make any move, he was safely out of view. We followed the trail. But all we found were squirrels, white-striped sparrows & orangeback rock lizards. 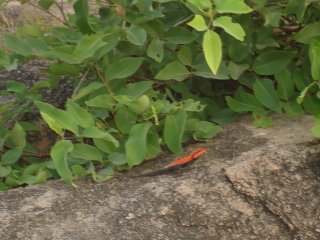 It is amazing how there is so much unity among all species of fauna existing at this habitat. If one sparrow knows we're around, the bugger squeals & announces to every little creature, "Watchful brethren, here there be monstrous humans !!". So much for nature loving humans..hmph !
With such a resistance put all we could do is click some pictures of the flora who didn't seem to mind out presence there. The scenic beauty was tantalizing. But we could not afford to rest. Our multicolour-winged friend was growing in confidence, because sunset was almost upon us. We started scurrying around pell-mell looking for a trail. Suddenly there was a swish of wings & the creature flew majestically away from the approaching humans ie. Us. It wasn't Sir Peacock, but one of his trusted generals, Sir Eagle. Bright brown & vigilantly checking around for intruders he went & perched himself on a rock about a 200 metres away. There was no way we could reach him. So we retreated for safety before he could launch any counter measures. Vanquished and tired, we took a different route back to base camp. This was when Shiva pointed towards some good news. A thick green foliage amongst the rocks. 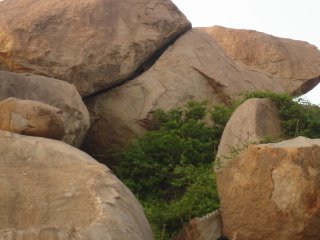 We had found Sir Peacock's fortress. It was deserted now & we uncovered some of his plumage which had probably fallen off druing his emergency take-off. But there was another startling discovery that we came across. There was also some skin which was shed by a snake. What was this, was Sir Peacock forging alliances with Lady Snake of Reptilia ?? We were forced to return as the sun was fast vanishing beneath the horizon rendering the sky into a flaming orange. 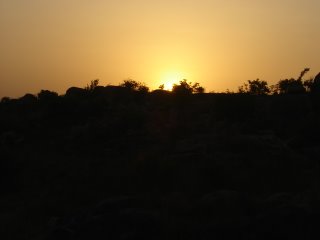 On our way back we unearthed sand, which we thought was strange since it was rocky hill. We had stumbled upon various findings on this day, but Sir Peacock had 'flown the coop'. But we Humans are made of stronger stuff than that, we will return. We are not at war. All we ask for is their friendship & a few photographs.
Posted by Quicksilver at 5/20/2006 09:54:00 AM

aaaahh.. to beat the summer.. u went trekking?? looks like nature was kind... have funnn.. come june.. the rains will take u too a greener pasture!! .. have fun exploring :d..
PS: hyderabad will be missed :(

mannnnnnnnn
u had gr8 fun!
its nice 2 read ur write ups
keep writing

@misscon-this was a impromptu trek planned in 5 mins.
@su- u stay so far away

Hey..Dont forget ur oath
"Thee shall kick friends ass also to take them trekking every saturday"

Hey...great post by the way...Nice narration and ya, this time we will definitely get Mr.National Bird's picture.. Up close and personal :P

Bored of birdwatching? I mean you're doing the real thing now.