Mourning the star, leaving a scar


Disturbing scenes on the roads of Bangalore. The death of Kannada Superstar Rajkumar( yeah the same guy who was kidnapped by Veerappan in 2000) has caused the whole state of Karnataka to go into mourning. A man known for great performances during his lifetime, Rajkumar affectionately called "Annavaru" was 77 when he passed away due to cardiac arrest.
But this was in the news for the wrong reasons. Under the excuse of mourning some anti-social elements took to the streets & created havoc in the Garden city. Mobs torched buses, attacked company offices and stoned police on the streets of India’s technology hub on Thursday ahead of the funeral, which was held at the Kanteerava Stadium. This caused so much panic in the city that bigwigs like Wipro,Dell & Infosys shut shop alongside schools & markets. On the other hand people like my mother who was witnessing this on TV, immediately latched on to the phones enquiring as to whether their kin were safe. 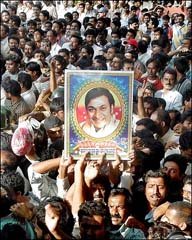 It is a known fact that in a country like ours people who are famous are almost treated as demigods. Everyone from cricket players to actors are held in high regard , not to mention the fact that some of these people even have temples to their names. The relationship between every celebrity & their admirer is only pleasant until a certain line is drawn. We have heard of innumerable cases where people have stalked their favourite stars, attacked their homes or in simple terms made their lives miserable. This sort of fanaticism is dangerous & I for one denounce this hideous unsocial episode in Bangalore.
Posted by Quicksilver at 4/14/2006 05:25:00 AM

Yes, it is dangerous and destructive. People lost lives just because a few drunken idiots wanted to have some fun. I join you in the denunciation.

hi
first of all i would like 2 wish u a very happy new year! (tamil puttanddu nal vazhttukal) jus tried a little bit of tamil :-)
even i am against all this.
its natural to mourn the loss of such a great actor, a great person but showing your love through violence is sheer madness
i 100% agree wit wat u hav 2 say on dis
anyways, all da best 4 ur exams
bye tc... nithya

Lite re bhai..... Political big wigs were also involved kathe...I was actually expecting something since the serial bomb explosions in Delhi, because India, especially the south has been pretty calm.....Some fingeritis these guys will do. Thanks to them, RK's soul might still be lingering around Banglore only. It may take a lot of time for the it to rest.....but whenever it rests, let it R.I.P.

What a great site here