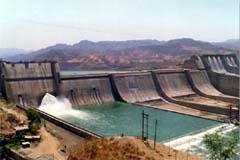 First, Lets lay out the cards on the table -
1. The Sardar Sarovar Dam is the biggest among the billion dollar projects being constructed as a part of the Narmada Valley developmeny project.
2. The height of the dam is stated to be 122 metres.
3. If this dam were constructed,it would leave approximately 35,000 families homeless.
Now let the games begin -
How will this project benefit Gujarat ? Cities, rich farmers, industry, politically powerful lobbies, not the people from drought prone areas. Before the water can reach Kachchh and Saurashtra, it will have to negotiate-literally-the water-intensive cash-crop growing, politically powerful districts of Vadodara, Kheda, Ahmedabad, Gandhinagar and Mehsana. Against their own directives, the authorities have allotted Vadodara city a sizeable quantity of water. Whats the whole hullabaloo about the height ?
The amount of potential energy in water is directly proportional to the height, thus a height of 122 metres means a huge amount of hydroelectric power which can be harnessed by Gujarat, Madhya Pradesh etc. It will also provide for displacement of water to greater distances thus way making water accesible to the draught hit areas. All this is in theory. 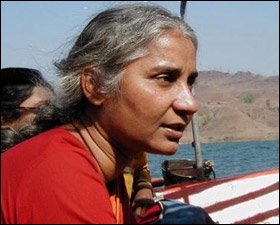 Nice, but why is Medha Patkar against this ? Medha Patkar who is ageing & ailing is spearheading the NARMADA BACHAO ANDOLAN, a campaign to protect thousands of poor farmers displaced or threatened by the dam. Here are the stats :
- 950 Adivasi families displaced in order to construct a Project colony at Kevadia
- 23,500 families who lose their lands to the Narmada canal
- 8,000 Adivasi families (from 104 villages), to be displaced from the Shoolpaneshwar Sanctuary, created to "mitigate" the submergence of 13,000 hectares of forest land
- Families who are being displaced by 'compensatory afforestation' and 'catchment area treatment' schemes. Their numbers have not even been officially estimated
- 10,000 fisher families who live downstream of the Dam whose livelihoods will be destroyed when the project is completed.
What the Supreme Court have to say about all this ?
The Supreme Court warned state authorities on Monday that it would stop work on increasing the height of a controversial dam if they did not properly rehabilitate people displaced by the project.
Posted by Quicksilver at 4/17/2006 08:45:00 PM

What is needed here is an objective look at the whole issue. You need to know the history of the issue. It all started in 1979. Had the construction been completed, a lot of development would've taken place, which would've included even the displaced families. The land that the displaced families would get would be 8 times more productive that what they have now.

But Medha Patkar and her NBA are running a disinformation campaign among these poor, probably illiterate and definitely gullible adivasis. Patkar and Arundhati Roy are hell bent on just stopping the dam work.

Take some time off and have a good look at these well researched articles:

I had no kinda stance on this situation. Anyways am more enlightened now ;)

good work. keep it up.