Nostalgia or more simply put, a longing for "the good old days" seems to affect all of us due to different triggers. Music, Weather, Photographs, Phone calls, Travels are amongst many such triggers.

One such trigger for me happened to be "Cleaning". Yes, the mundane household activity that my beloved wife happens to think that I'm incapable of (cooking, planning romantic dinners, staying awake past midnight are other skills that she normally puts in this category). More about that another time, lets get back to what I was saying.

So today afternoon was spent, reminiscing about many events from the past and putting in place a mini library at home. 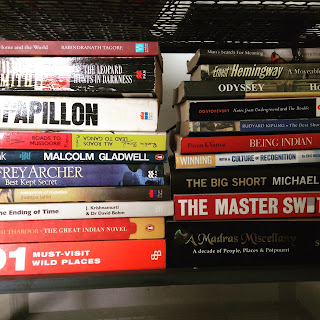 While rummaging through the box that had safeguarded these books I came across some amazing little things that reminded me of some fantastic times in Pune, Bombay & Barcelona (specific to the stuff I found). I remembered the people associated with these moments in time that I successfully froze in these objects & got busy sending the aforesaid folks a "hi, how are you ? look what I found " message on whatsapp.

So in chronological order, let me reminisce with you a few of these occasions -

So here is a pic of a tissue paper from Cafe Leopold in Bombay. It was my first time in Leopold & I badly wanted to go there after having read so much about it in Shantaram. The four signatures that you see on the paper are Chetan Shetty, Anirudh Krishnan, Ambujesh Yadav & myself. There was also a blogpost I had written about that day which you can read @ http://adityagn.blogspot.in/2009/02/football-cafes-and-movie.html 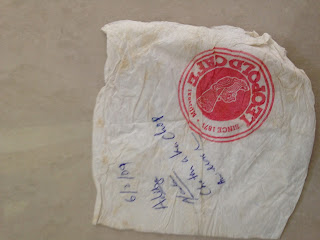 Another tissue paper, this time from the suburbs of Bandra. Toto's - the place with the Maruti Van that looks like it has crashed into the wall, plays some amazing music. This was a spontaneous trip with Chetan, Swathi & Prachi. Speaking of which, it is Prachi's birthday today & I sent her this as a gift. Nostalgia as a gift, interesting no ? 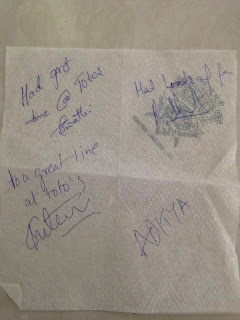 This next one is a catalogue from the Monetary Museum in South Bombay. This was during a hot summer afternoon when Ambujesh & I just happened to chance upon this place & decided to walk in. We spent a good two hours there & were humbled by the quality exhibits on show. Bombay can do that you, surprises at every nook and cranny. If memory serves right, we went for a movie at Eros after that ? I don't remember the details though. 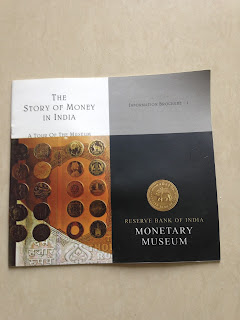 One of the better weekends during my days as a bachelor in Pune was going to NH7 before it was as big as it is today & of course the plays that were hosted here, which honestly were few and far in between. These are three tickets from the plays - " The Blue Mug" , "Death of a Salesman" & "Boy with a suitcase". Dilip Anand aka Pedro was the constant companion for all three, while my other two roomies : Himanshu & Pulkit joined for one of them. 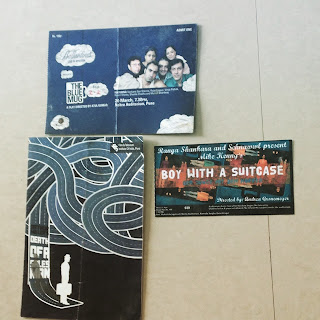 My most favourite adventure so far. The single spontaneous backpacking trip to France & Spain. This is the bag that contained all the goodies that I bought at the FC Barcelona store at the Nou Camp. 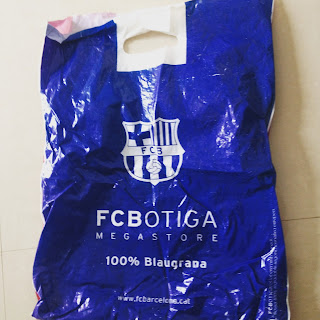 Quite co-incidently, I was at a local South Indian store that sells everything that makes one miss stuff from Madras, Hyderabad or Bangalore. I found this copy of Gokulam, a children's magazine that I used to wait eagerly for every month. Stirred up so many memories of those days. Probably this magazine was the trigger to me developing the habit of writing. 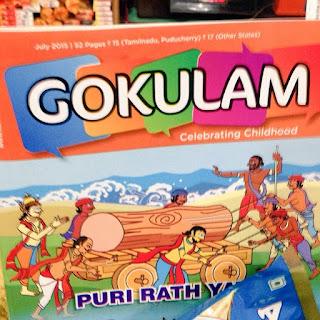 So I wish you have your nostalgia moments & smile. I hope that this post may have struck some chords with those of who you may relate to these pictures. Drop me a line and say you smiled and thought of me.
Posted by Quicksilver at 7/12/2015 08:30:00 AM

Awww! Hope we create many such moments too!

Machan..the coin museum trip wasn't after the movie. There was someone else as well for the movie :P. I think we went to the museum after samovar..not sure

Aww :) that song that played at candies , and we couldn't figure which song it was. Every time I shazm a song, it takes me back to that moment, wishing we knew about shazm then :p

Nice one!, made me feel nostalgic.