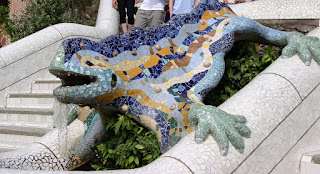 Before reading on, I urge you to read up a little about Gaudi and his works.

So like all geniuses, Gaudi walked really close to the line between genius and mad man. Barcelona's street cafes are full of stories of his eccentricity and perfectionism.

But this is not about the man himself, this is more about Parc Guell. Parc Guell was commissioned by Eusebi Guell, one of Gaudi's ardent and most regular patrons. It was meant to turn out into a housing estate eventually, but apart from Gaudi, Guell and their lawyer friend, no one really was interested in moving to a barren hill top.

After a tiring walk up the Avinguda Vallcarca, you come up to the escalator which gets you to an entrance of the Parc. As I entered, I found a Trinidadian man, playing the flute for alms. Upon further enquiry he said that he had learnt it from an Indian guru many years ago.

You get to see sweeping panoramas of Barcelona from this park. A long and winding road leads you to the main the entrance and the eccentric halls and admin offices with an unmistakable Gaudi mark on them.

The mosaic dragon is probably the most famous sculpture in the park. Above it are the halls that were meant to be open living spaces. The way the ceilings are done also have Gaudi written all over them. There is a certain style of art, that Gaudi decided to blur his architecture with.
Basically he breaks ceramic tiles and repositions them together like a jigsaw puzzle giving it a superb finish.

The park has many ups and downs that finish at the cross at the top of the park near where we entered, completing a full circle.

So in a way, Gaudi's Parc Guell is like life itself. Long and winding, with interesting people and music, with stops to see and admire, with sights that perplex you, with places to relax, with uphill climbs and most importantly with the feeling of accomplishment and freedom at the end.