The title is taken from a poem by William Blake. Ironically, the situation that the Tigers face in India today is far from bright. These majestic beasts are usually said to be powerful and magnificent. The panthera tigris is the National Animal of India. 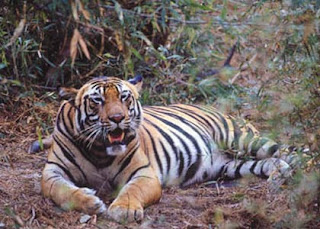 I was on 10 day trip to Bangalore - Mysore. I decided to visit Nagarhole National Park. It is said to have a decent tiger population along with the Bandipur and Wayanad Wildlife Sanctuaries. We got to Nagarhole at around 9 in the morning. We were told that we would not get to see too many of the animals, since most of them were moved to Bandipur. So we decided to look around the place in our Maruti 800 itself. Obviously, we had to stick to the road only ;) .

Meanwhile, we met a forest officer who was pretty passionate about Project Tiger. He explained to us how the tiger population in India had dwindled from 3400 to around 1400 in the last 6 years. A sad state for the majestic beast indeed. Tigers are very territorial animals and are said to control over 20-30 square kilometres of land. Although poaching is still rampant in many parts of the country, coupled with mismanagement and badly trained patrols, I think Project Tiger which was started by Indira Gandhi way back in 1972 is now going to have some new zeal as more and more people are becoming passionate and vociferous about this cause. Afterall it would be a bloody pity if my children or grandchildren could see the Tiger only in documentaries. 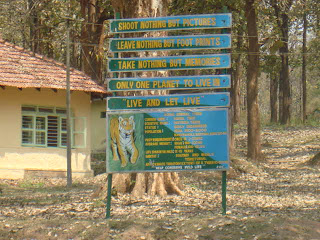 In the Budget session, I was quite happy to notice that P.Chidambaram has actually allotted Rs.50 crore to the National Tiger Conservation Scheme. A Tiger Protection Force is also going to be setup. I believe that this world is big enough for all species of animals and pray that the tigers move away from being dangerously close to exctinction and it is upto people to help it survive and repopulate. Stop Buying anything that has anything to do with wild animals. When the buying stops, slowly the killing will too.
Posted by Quicksilver at 2/29/2008 07:18:00 AM

i hate to sympathize with the animal, it undermines it majestic character but reality dawns on us....even as i write now, they are being hunted for absymal reasons, its depressing! :(

but they are good things to know too besides chiddhu's generous budget... media came up with stuff like fun facts about tigers, including folklore from bandipur etc. so i guess we are on the right track. :) grrr :) and adi, for a second i thought you shot the pic! some lucky ass you would have been... :)

girl, the second pic i only took ;)

Its a pity that the population has gone so low inspite of the so called efforts... Nice to see all the money going that way... But I really hope we wudnt have to see a book/movie on tigers though I think crichton is good n all that.

...please where can I buy a unicorn?

Allen Iverson (NBA), Iverson Allen's sport in famous basketball player in the NBA, all-star teams, and served on the dream team captain. Where to bounce high net, net 40.5 inches high approach is to bounce 114cm 45 inches (about). On June 26th in 1996 by The Philadelphia 76ers selected in NBA history, become The most short draft, nicknamed "AnswerAllen Iverson shoes The Answer)".