When I was in Class 6, I religiously played cricket in the hope that I would become a cricketer someday. The coach did not pick me in the school team and chose some kids who were obviously less deserved of their positions than me. The perplexed 11 yr old that I was , I walked away from the world of cricket other than the occasional game with friends.

The Australians stormed home to yet another World Cup victory last week and this prompted me to blog about cricket which I thought I'd never do. Their dominance of World Cricket is very similar to the way the Brazilian team reigns supreme in the world of Football. The way these teams dominate the game and decimate their opponents is a sight to relish.

But does their performance depend solely skill, talent and the way the sports administration works in the country ? Of course these are very evident reasons of their respective teams' success. I observed a sort of pattern in both these teams and plan to write to Mr.Sharad Pawar one of these days suggesting to him to change the kit of the Indian Cricket team to YELLOW.

Yes Yellow !!! When people say they've got the blues, it means they are not doing so well,then how on earth can we expect the Men who've got the Blues to do well in a sport. Of course the Italians are an exception to this fact. Yellow is the colour of the Sunflower(which can be placed on the caps as the logo for the cricket team) .It is also Martin Scorsese's third cousin's favourite colour. Bands like The Beatles sang about the Yellow Submarine and not a Blue Submarine and even Coldplay has made a song on the colour. So whats not to like about yellow. 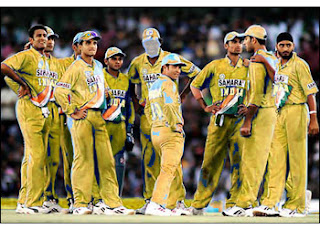 Its simple logic ->
When we need some service, we look in the Yellow Pages
When we need victory, we look to the Men in Yellow
PS:MY FAVOURITE COLOUR IS BLUE
Posted by Quicksilver at 5/04/2007 08:18:00 AM

Yeah! No more blues for me either! given up on them. Rang de BASANTHI it is (remember!)

Woah! I never expected you to blog about cricket either.

Hey, if we wear the yellows, what would the OZs wear? I think they deserve the Yankees black and white stripes, darth. For their offensive behaviour on and off the field, thats what the criminals wear in Indian jails.

Are anymore of these coming?

adi this is a great blog about the dominance of the aussies in cricket but from my point of view i think the lankans deserved to win it. I hope some day our Indian cricket team dominates this game in BLUE

Blue eh? Nalanda through and through :P