Lost in the sands of Time 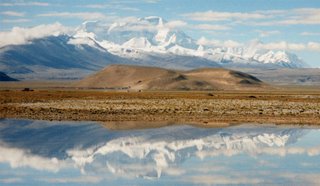 Shangri La, Atlantis, El-Dorado. These are the names of 3 cities which have captured the imagination of explorers,archaeologists and adventurers over the last few centuries.
But did these cities really exist ?
This is an answer which will probably never be answered in our lifetime, although I wish it could be.Proof of these cities can be found in ancient texts and this has led people to believe that these formerly flourishing cities are potential treasure chests.
Allow me tell you about my favourite of the three - Shangri La. Several possible places in the Buddhist Himalayan region between northern India and Tibet have claimed to be the basis for this legend.The legendary Kun Lun Mountains in Tibet offer other possible Shangri-La valleys.A popularly believed inspiration for Shangri-la is the Hunza Valley in northern Pakistan, close to the Chinese border,being an isolated green valley surrounded by mountains, enclosed on the western end of the Himalayas, it closely matches the description of the city.
This city is supposed to home to Immortal people, flying Lamas, architectural wonders and is a lush valley untouched by the insufficiencies of modern civilisation. Only those who are pure of heart have the power to see the city. So that rules me out !!
What makes it so damn difficult for modern explorers to find is that Tibet ie. The Roof of the World is home to the world's most inhospitable terrain. After watching most documentaries Tibet, which was once a forest many centuries ago, brings to my mind the picture of vertical cliffs and dry barren plains. Hopefully if my show airs someday, I shall go where no man has gone before,with my team and explore Tibet,which as a friend of mine once told me is truly THE LAST FRONTIER.
Talking about Tibet,it is impossible to ignore the role that China has played in shaping modern Tibet. According to the Govt. in exile, Tibetan culture is diminishing in Mainland Tibet and the Dalai Lama and his disciples are trying their best to keep their traditions alive at Dharamsala. Its a sad state of affairs considering the fact that the Tibetans are being forced to adopt a foreign culture.
Its a pity that something this beautiful is being scarred by politics and foreign exploitation. But still,as some famous Tibetan said - "Wherever you feel at home, you are at home. If your surroundings are pleasant, you are at home.”
Posted by Quicksilver at 2/13/2007 05:28:00 AM

hey ,,i dint no u have interest in acient lost & mystrious things
guess wat even i love these thing
,,,,,,,
hey u said u will try to find these places ,,,,i love to acompany u ,,,,
give me a call when u r starting the trip ok

hey... to be true, was quite bored to read the whole of blog, me not really into it, u know history and stuff... anyways, read ur previous posts and i better comment on them... great writing, amusing style and a sting of thrill attached to them... keep up the good work...

its the nature of life... most things diminish and die..

was hoping to see a loong post, with trivia, more on the expeditions, etc... but this shud do for now...


PS: u shud try venture being a travel writer...its the in thing these days and think u'll like it..

wow!
firstly, gr8 title to start wid....very apt.
i dont hav enuff idea abt such histories n geographies,but felt gud reading it....i actually "learnt" sumthing frm it!
keep up the gud work,nd keep educating ppl like me who r alien to so many things in this world.. :)

id give anything to go on a treasure hunt....sigh if only id have the freedom to get up....
the attraction of silent places where large silver moons and the splendor of the stars...where the voyager sees the glory of rising and settings of the sun in the savage places ignored by the people...unchanged by the eternal rolling of times

Did u really see nothing but the eye? said...

hey aditya!! my heart skips a beat(almost) when i hear the names Hunza, Chitral, Karakoram, Kalash etc. js like Hunza, theyr all in Pakistan and are some of the most beautiful and breathtaking places in the world...which is maybe y the ppl there hardly emigrate elsewhere ;) bt sexiest places in teh world they are...PoK is filled with such kindsa places..course Kashmir and Himachal also ...oh baby bt Tibet truly takes the cake! lets do a trip sumday...