Another semester ends. Exams are around the corner. Friends say, "Mama lets start studying !!". I concur, if we don't study for the 10 days before the semester exams, whats the point of wasting so much money & travelling 50+ kms to and fro everyday. But unlike a few others who keep saying - OUT OF ORKUT FOR A MONTH, NOT BLOGGING FOR A MONTH, I won't make such bold statements. Though I will surround myself with the almanacs of electronics and mechanical engineering. My thoughts will be about the television series I plan to host in the not so distant future (if I find a friendly producer). Its a travel show,the first instalment will be me running around in Europe. I intend to make it by road from Dushanbe to Reykjavik, making friends along the way, learning the local dialects and I especially look forward to drinking milk of the mountain goats from the Hindukush. They say it is naturally sweet. Naturally sweet like this girl who once told me that some photo of mine reminded her of Colin Farrell in The Recruit. Colin Farrell,Oil Barrel who is she kidding ?!!
These exams seem to be another topic of debate for my seniors and good friends who are doing their post-grad/working. They ask me, "Adi,whaddup !?". I say, "Ejjams ra!!". Pat comes the reply - JNTU exams ke liye you study aa !! Duhh ! These are very same chaps who have 70+ engg percentages. Seniors who have been in my position me always advice me to study and improve my scores while I still can. Now they are certainly not kidding.
So getting back to my travel show, the plan is perfect, the only flaw is that I have to rely on me to execute it. The second instalment as suggested by a dear friend of mine shall include Somalia(Africa). The poorest country in the world and the place where Black Hawk Down was shot. Oh yes !! Lets go blow the horn of Africa. Then probably go Mummy hunting in Egypt or rather go get stung by those Tse-tse flies in Zaire or maybe an amazing safari in Namibia. So if there any buyers for the show, do ping me. Of course, I have lots of other plans in my head. Only Mr.SAMAY will tell if they materialise or not. I hope I'm not kidding.
Now this is certainly worth mentioning, I have finished a book called The Picture of Dorian Gray by Oscar Wilde. This is the first novel I have read after 7 years. The ever novel that I read was The Sixth Man by Roland Perry which was about KGB conspiracies. This is a book that no one has heard of. But I'm sure its lying in some corner of the HPS senior school library. Next on the list Leo Tolstoy - War and Peace. Leo Tolstoy eh ?! Mr.Narayanan, who are you kidding ?! :P :P 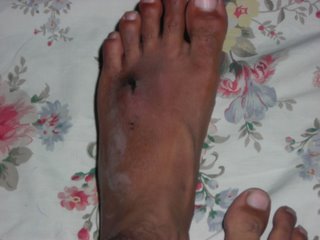 For all those who are still worried about the foot, thanks for the concern guys !! Its shown a drastic improvement, since I have been doing nothing but sitting on my arse and ordering my mother & sister to bring me everything from the morning newspaper to the pills I take after dinner. Talk about royal treatment. Sometimes methinks I was a prince or a king in my last birth, just love getting things done by other people. But then who doesn't like it.
Foot says - Enough time on the chair,sir. Time to get back to the horizontal comfort of the bed.
Me - Yes sir !! Just don't hurt too much today.
Gotta run...err I mean limp. Until next time - Cheers
Posted by Quicksilver at 10/29/2006 11:07:00 PM

hey adi! u seem to be osciallting between the now and later of what we hv to do.. THe ever frigtening now of exams and beautiful sights of imagining of the later travel show.. U are a travel freak after my own heart man.. I can relate perfectly cos i too am in similar doldrums.. it is not a travel show for me :P ... All the best man.. hope we manage em well

@spoorthi - aren't you one of those "away for a month" candidates. ROTFL
@adi-good one ra !! What is name of the show ? Adventures of Colin Farel LOL ;) ;)

hey tam bram..good one re...iv been bugging ppl abt wanting 2 travel the world so i can totally relate 2 tht one...n baap..v know ur foot's healin n all but..why tht pic :(

kool...all the best with that show man

VAARRY NAICE!
Was it BLUE at any point of time? If you DO have a pic of that stage put it up no? I louu that colour:-P.
And TRAVEL reminds me... You should prolly try local araku for a change. Mummy hunting and all, you take light.

OR you could just talk to victor for an hour everyday. That could be a show :P

I think that show is called Pg 3,its hosted by Pooja Bedi on zoom :P :P

u plan the show ..i ll pool in the money!!-Mr colin farell!....LOL
good luck with exams and the foot!
P.S- ordering things around!:D :D..we have something in common!!

ADIIIIIIII remove the pic it is scary.... adi i m travelling with u.....and plz do add galapagos islands to ur list

nice one mate... Why exactly did she call you Colin Farell? :-?
Dint know ur leg was that bad... Must be hard with pain in one leg and exams around the corner...Happens ... you gotta do multi-tasking dude... rest when it pains and study when it doesnt...