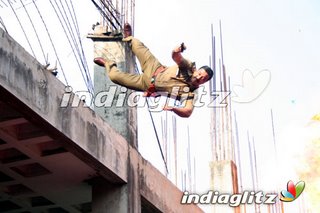 Considering that this was my first tamil movie in a Chennai theatre,I was very anxious. I had earlier seen The Rock about 8 years back.
Gautham directing Kamal Haasan,Jothika & newcomer Kamalini Mukherjee (who I had seen in Anand & Godavari) was the perfect recipe for a potential blockbuster.
The Plot
Another story in a Police Officer's Life.The story is very intense,it starts in typical Gautham fashion depicting Kamal aka DCP Raghavan showing his policing prowess beating up the goons.
He is summoned by his friend DCP Arokiaraj(Prakash Raj) to investigate the case of his missing daughter Rani, whose finger the DCP had found on his doorstep tied with a lemon & chillis. This leads Kamal to start from scratch and he slowly finds the girl's body in a field badly mutilated.
This begins the hunt for the killer. Arokiaraj & his wife move to the US to try to put this episode behind them & get on with life. A few months later,they also are brutally murdered. Kamal now goes to New York and along with his NYPD liaison Detective Anderson uses his instinct & expertise to uncover shocking clues. He discovers 4 more bodies, most of them in the same condition as Rani's body.
Narrowing down various options, the killers, Yes there are two, this adds a kick to the storyline. They are qualified doctors who are mentally disturbed and assault women who are rude to them. Ilamaaran & Amudhan (played by Panda of Gharshana and Srikanth,the dark guy who shoots himself in the same movie)are not unveiled till jus t before the interval.
They manage to severely damage Kamal & escape to India. Meanwhile Kamal's lovelife is getting back on track with Jothika, a single mom who he rescues while she tries to kill herself. His first wife Kamalini dies when a goon pushes her off the 3rd floor of a warehouse.
The movie's climax is fast-paced & gripping, a must see for all action buffs.
My Comments
Gautham is slowly showing signs of becoming a top notch director after his last two works, Kaakha Kaakha & Vetaiyaadu Vilaiyaadu. He has a very Hollywoodish style which might make him a little geeky at times, but I'm a big fan of his.
Kamal Haasan,a solid performance. It is unbelievable that he manages to do that sort of action & perform stunts that actors half his age are scared to do. That says a lot about his work ethic. This adds to his list of super cop movies like the hard hitting Kurudhi Punal.
Jothika,she is definitely coming into her own & has consolidated her status as the Tamil industry's top actress with this performance & a simultaneous release Jillendru Oru Kaadhal. Manages to portray confusion, despair, happiness & care with ease in the movie.
Kamalini,her first Tam flick & Boy ! she landed with the big fish. She plays the role of Kamal's wife as she was a veteran of many movies & is said to surprised Kamal with her professionalism. A talented girl to watch out for in the future.
The villains Daniel Balaji & Saleem Baig are scary,but we sympathise with them in the sequence at the Police Station in the flashback. The crowd was actually abusing these guys whenever they got on screen. The way the rapes & murders are filmed are very gory & graphic, so I suggest the weak-hearted to watch out for a few scenes.
Ravi Varman, the camera man has given the entire flavor and feels to the movie. In a lesser craftsman’s hand, the film would not have got this polish and finesse. His visual metaphors are apt and the lighting is amazing. The way he & Gautham explore New York would have made Woody Allen proud. Harris Jayaraj's music is varied & as delightful as ever. His cop intro songs happen to always become big hits. Get your hands on this album and you are sure to appreciate it.
The movie has had the biggest opening in recent times and is definitely among one those CRITICALLY ACCLAIMED movies.
Posted by Quicksilver at 9/10/2006 06:34:00 PM

wen is this releasin in the tel version?