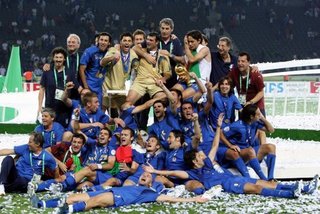 Football is a religion for many. I belong to the many. And mere mortals could experience a slice of heaven as the footballing demi-gods descended upon Deutschland. The last one month has been exciting & there are so many around the world that would be feeling lost now that the tournament is over.
The Italians are elated. After the Serie A was rocked by the match fixing scandal, I think Italy finally has a reason to celebrate again. It was a world cup to remember with some exciting games. This tournament has been dubbed the Defenders tournament & that is how it was till the end. The team with the better defence won took top honours. Fabio Cannavaro who I first saw at Parma along with a young Buffon. Of course the both now play at Juventus. I had predicted at the start of the world cup that the partnership of Cannavaro & Nesta would be unbreachable. Although Materazzi deputised for Nesta, he was no slow poke although he made a few mistakes sometimes. But he was a busy man in the final, he equalised, made some ruthless tackles, got headbutted & dispatched the spot kick. 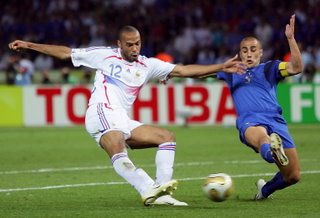 Enough can not be said of Cannavaro. He was the player of the tournament for me & deserved the Golden Ball more than Zidane. Zidane only came into his own after the match against Spain, Cannavaro had been a rock for Italy since the first game. He marshalled his troops and was the perfect captain throughout. He will now occupy a special place in Italian football history alongside some legendary names life Giuseppe Bergomi,Franco Baresi & Paolo Maldini. Along with the menacing wingbacks Zambrotta & Grosso, they had a formidable defence. Their brain & braun central midfield consisting of the grimacing Gattuso & the sublime Pirlo was instrumental in their victories. Though their attack was lacking, Toni & Totti showed rare glimpses of their true self. I would not say that the best tean won, but definitely the most organised team won. 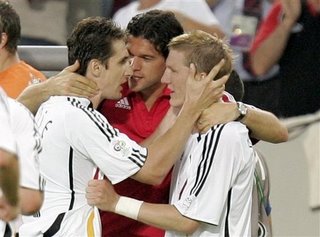 Talking of the best team, I definitely think Germany or Argentina should have taken the prize but luck had a different say. The four teams ie. Australia, Argentina, Germany & Italy, I was rooting for played against each other & consequesntly knocked each other out. Australia along with Ivory Coast, Ukraine & Ghana were the surprise packages of the World Cup. The Socceroos comebacks against Japan & Croatia trult epitomise the Aussie Spirit.
The Albioceleste of Argentina had the firepower & the defence that a tournament of this nature demanded but luck wasn't on their side. The Germans were dazzling going forward with Klose,Podolski,Ballack & Schweinsteiger. Solid in defence, Mertesacker is a name to look out for in the future. But this world cup has done them a world of good.
The French... Zidane could well have the architect of a french win, but it was a sad end for the mercurial playmaker. But youngsters like Ribery & Malouda made their presence felt.
Brazil was just as they were reaching their peak, the french pulled the carpet from beneath them. Roberto Carlos who I thought was the best left back ever was at fault for Henry scoring.
Spain still remain PERENNIAL UNDERACHIEVERS.
The Dutch will surely be better next time around because they had a very young team this time & these guys are sure to mature.
The Portuguese were a tough outfit but filling the shoes of Luis Figo will be a tough task.
The names of Ballack, Klose , Robben , Ronaldinho, Ronaldo, Zidane , Vieira, Cannavaro, Totti, Pirlo ,Cristiano Ronaldo, Rooney , Beckham, Raul ,Torres, Messi ,Tevez etc will be etched in out memories forever.
Posted by Quicksilver at 7/13/2006 06:32:00 AM

Nice review of the world cup man..What Zizou did was wrong .. yet he ddi deserved golden ball cos he along wiht ribbery brought a dead french team to life..
The saddest part was the highly unfortunate way the best sportsmen in the world were knocked out.. Aussies deserved to win tht game
nice post

I disagree on the point about per mertesacher...i think that he aint such a good defender apart from his physical aspect..he cant read the game too well and isnt too fast. btw, schwienstiger means "Pig Marshal" in german...LOL!

PS: germans shud have won for the "cuteness" factor :(

dint know where else to comment.. happened to get this link.. n i went on n on for hours... about the rains.. politics... one last time... WILL U MARRY ME???

Keep up the good work »