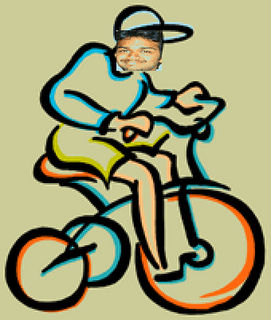 Ah Yes ! Childhood, the time when your only worry is whether your mother is going to scold you for spilling talcum powder on the floor so that you might play "SKATING". I'm 19 going on 20, and I have only occasional flashes of my blithe childhood. The sugarcane juice that Appa used to buy me after Greenwoods. The way my mother, who has one of the "most beautiful handwriting ever known to man" used to scribble in my notebooks so that it might seem to my teachers that I had done my homework. I often hear stories of my days as an obstinate kindergarten-goer. I am told that I used to sit on the window sill facing the railway track with my cheeks puffed & eyebrows making a V refusing to do any thing remotely academic. But Thank God for Hanna Barbera. Tom & Jerry would bring me the cheer back into my melancholic existence and thus the days went by.

Kindergarten was the place where I learnt the song, "HUM HONGE KAMYAAB". I guess I have subconsciously made an effort to make that the theme song of my life. But due to certain Irishman named Ronan Keating, "Life is a Rollercoaster" is what I swear by. Those were the days of annual concerts & I have been known to be very scared of make-up & give a hard time to my teachers at the Green Room. Reason: Well, you see my aunt is professional Bharatnatyam dancer & I saw some really scary looking guy who was supposed to dressed as a 'scary guy who was supposed to kidnap the damsel'. My friends who wear make-up these days can still vouch for the fact thats one fear I haven't got over. Life seems so simple. I remember the days when I used to jubilantly trot into Pauline Media Centre (yeah thats the shop adjacent to st.ann's) & buy books in which Alphabets were taught by elephants, Math by Mickey Mouse & Opposites were explained by the Seven dwarfs. Amar Chitra Katha & Noddy Puzzles were other favourites.

Thanks Ma for never saying no to any book I wanted. All this was just making a path for the future and as expected I'm still the same. Read(not a lot) all sorts of things except academic material.
My childhood life would be incomplete if I didn't mention Building blocks, GI Joe, Glo Friends & Hotwheels !!! Was introduced to movies at a very early age in life. Dalapathi was the first ever movie I saw in a theatre, I was 4 then. The bug bit me hard & has become one of the passions of my life. Used to love Nagesh comedies & Ilayaraja music, though I never understood the lyrics back then. Those were the days when I used to take my kiddie bat & play cricket with older people. Obviously I was bowled to using "under-arm throws". These were the days when I used to love scribbling on the walls of my house & my mother would get yelled at by the house owner.

My uncles, trust me these guys are hardcore. Made sure my every visit to Madras was eventful and fun-filled. Introduced me to computer games (Mario) in an office where they worked. Took me to every amusement park on the coast & made sure we went to the Marina beach every weekend.

I hated veggies back then. I still do but not that badly also. God ! Why do farmers grow Spinach ?? I was quoted to have said "so what if that one-eyed Popeye eats, he's just a cartoon." Intelligent Kid hunh **pats self on back** ! Rumour has it that I used to call a tomato, "gogli-wogli" & used to get the kick out of squishing every tomato I laid my eyes upon.

My photos prove that I was chubbier in the days gone by. My Soumi Akka used to say that I was a shy fella always running away from her friends & apparently I loved to break dance. Oh yes ! I used to play 'House House' or rather 'Castle Castle' too. Obviously I was always PRINCE CHARMING. But the castle was very weak & kept falling off because it was made out of pillows. Present parallels can be drawn to this, some say I build castles in the sky.

The company that made my tricycle was Tobu. So many memories, so little time to recollect. If I wrote more, I'm sure you would fall asleep. They say what you are is a reflection of what you have been in the past. I agree.
Posted by Quicksilver at 6/03/2006 12:01:00 PM

Let's see... there're way too many parallels for me to mention all, but how can I not specify that talcum powder skating was the bane of my existence for a few awesome weeks. That is, until my ass started hurting.

Hmmm, yes, I did mention before... your mum's handwriting is amazing. I still have that Chemistry book somewhere with something she'd written in it. =)

Amar Chitra Katha was my bible so to speak for a long time leading me to love books... you should've seen how many I had to give away and basically had to cry over before leaving that part of my life behind. And please don't laugh, I used to have GI Joe toys AND Hotwheels... something my bro and I used to amuse ourselves with for hours. Hehe, and yes, despite all that, I still did girlie things.

All I can say is ... WOW.
House/House with my bro, Cartoon Network (esp. Popeye), trips to Chennai & Marina Beach, cricket with all my guy friends, Mario, AND not to mention, a tricycle. Been there, done that, Adi.

The fact that you have an akka named Soumi scares me. You know why.

nice way to trace back old memories and make new ones(look ^) and i must say that u made a pretty good job..

many of these actually, match my childhood ones, only for the fact that i never moved out of hyderabad...

and Hanna-Barbara, which u spelt incorrect is not one name but two different names.. :P

I still have my blue tobu cycle. House/House has great memories for me too. It infact left a patch on my head with a couple of stichmarks too. So how can I forget it :p. We still play that with our lecturers. Don't we?

Somehow cricket with a cream coloured hollow plastic bat and a striped pink plastic ball was the most visually the most irritating thing for me. But fun not stolen!

Hey Santa,
It felt really good to read through your recollection of the childhood days.Since you were my very first cousin,whom I played a lot with, I have something to add.I dont know if you remember this, but you used to jump from the loft onto the bed like you were one of the GI Joe characters and when you fell, you'd stare angrily at me for 1 whole minute like I had something to do with it.I never remember you crying,though, when u got hurt.
Chal,see you soon.Bye.

sigh!!...if i only had half the recollecting capacity as u did.....but thnx dude this post helped:)

heyy....nice blog da...brought back all my childhood memories, n yeah i used to do all that talcum powder skating...n i had a huge collection of hotwheels... :-P.....tom n jerry! i still watch it....all in all too gud of a blog...keep bloggin....