The most famous LEFT FOOT is dead 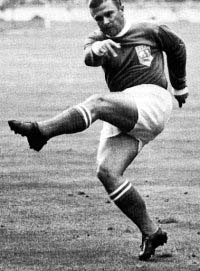 Ferenc Puskas
For the uninitiated Ferenc Puskas was part of the Mighty Magyars during the 50s. This Hungarian team that was the first ever foreign team to beat England at Wembley.He was a very unusual striker, stockily built and had the most respected left foot in the world at that time.The goal that Puskas scored is probably one of the most famous goals of all time,his pull back with the left foot that many including me are disciples of, and the shot with a sharp angle that went into the bottom right corner stands out in History. He was fondly called the Galloping Major. He is probably the only footballer the world has seen to have a near 99% strike rate. He scored 83 goals in the 84 matches that he played for Hungary. His partnership with Alfredo di Stefano for Real Madrid will be remembered for aeons to come as probably one of the most deadliest strike pairs ever. He was part of the Real team that mauled Eintracht Frankfurt 7-3 in the European Cup. Gee !! How I wish I belonged to that era, goals used to flow. Now all the bloody defenses are stingy. A stadium in Budapest has been named after this legend.
MAY HIS SOUL REST IN PEACE, MAJOR THERE WILL NEVER BE ANOTHER LIKE YOU
Posted by Quicksilver at 11/21/2006 06:41:00 AM

nice one baap!..reminds me of the left flank we used to play in...really nice to remember a LEGEND like that!..MAY HIS SOUL REST IN PEACE.