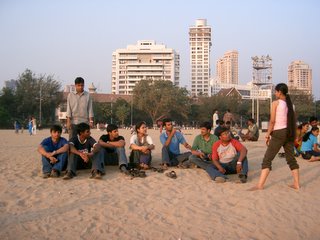 It was a bitterly cold morning when we arrived at Dadar station for IIT Mumbai’s annual cultural festival MOOD INDIGO 2005. A scrawny looking guy(geek as expected) received us & dumped us in a bus. We reached the IIT campus tired & frustrated because we had taken the slowest train to Mumbai. Since we reached a day early we decided to explore the city a little. Its such a filthy city. Everywhere you see there a million people around, seems like you are stuck in one of those fast forward videos. But certain parts of Mumbai are superb.
The next day onwards the competitions commenced & we split up & covered as many events as possible. While a few people went to the Entertainment Quiz, the others went to a Fairy tale book making contest & JAM. JAM honestly wasn’t upto the level one expected it to be but it churned out a few laughs anyway. I think the “event of the fest” was definitely “HALLA BOL”, the street plays. The colleges based most plays on important social themes like dowry, infanticide, corruption & strangely enough India’s obsession with fair skin etc.
Most of the performances were mind-blowing. Special mention must be made about IIT Kanpur & DAV college,Chandigarh. The following day there was a panel debate featuring Mahesh Bhatt, Srinivasan Jain & Ayaz Memon which was truly spectacular. The World Quiz was exhausting( trust me I got 5 out of 25 right !!). This day also featured The Treasure Hunt which was wild. People was asked to bring stuff like hair with split ends, live puppy or cat etc. Then Creative Writing , Potpourri & Word Games were a few other events that the MGITians took part in. MGITians are certainly proving that wherever they go they are not just there to merely make up the numbers. Though we did not win anything big, we certainly gave our best shot though we were unprepared. These fests aren’t complete without their Pro-shows.
MOOD INDIGO ‘05 featured Indian Ocean, Shaan, Shuffling Demons(a jazz band from Canada) , Vayu & Sceptre. The best show without a doubt would have to be Indian Ocean. Their rendition of their superhit song “BANDE” from the controversial movie Black Friday was a breathtaking. It is my opinion that atleast once in your life you should experience the IIT way of life. So people if you thinking of going to Saarang’06 go ahead & make plans, because it might just change your life.
PS: We did not come back empty handed, yours truly won four T-shirts in “Guess the Blockbuster”.
MUST SAY THIS IS THE BEST EYE CANDY FEST IN THE WHOLE COUNTRY
Posted by Quicksilver at 1/11/2006 09:44:00 AM

Congrats... you won the tees atleast.. you must have had a damn good time there.. but why's the sex-ratio so awful man?

Mood Indigo....hmmm....sounds fun...wish i cud hav come, but work comes first...Bombay...the city does have charm...be it the skyscrapers n discs...or the beaches...or the heavily crowded locals...each place gives u a different feel, its definitely crowded, but its the city of dreams....its ok 2 hang around n have fun 4 a couple of days...however i'd prefer apna hyderabad anyday.....

and oh i forgot, the eye-candy's definitely awsum ;)

This is very interesting site... »